Flexibility and strength. Yep, this is what gymnastics is all about and I wanted some of that!

My quest for an adult gymnastics club close to home has been going on for several months to no avail. It is more popular with kids and teenagers and therefore due to the lack of demand from adults, there are hardly any classes catering for 18+. Few days ago though, my luck changed as I called a club I had found on google which had a review mentioning their adult class was awesome. When I called them up however, they told me they had now cancelled the class because they no longer had a qualified teacher to run it but the lovely lady I spoke with, told me there was another place which definitely has it - the Daventry Phoenix Sports Academy (DPSA).

As I looked up the place, I realised it was a good 30mins drive by car. To make things worse, the class starts at 7.30pm and ends at 8.30pm. I like to wake up early and therefore have to go to bed early to get a decent amount of sleep and doing intense activities just before bedtime will get your heart pumped up and prolong the time for you to fall asleep. I therefore was contemplating in my mind whether it was worth it and decided to give it a go at least once as I'd been wanting to do this for a very very long time.

I had imagined the following prior to attending the adult's gymnastics class:

A teacher to show you how to do things

It wasn't the case. Basically you had the hall to yourself and you could use all the equipment and facilities but there was no teacher per se. It would have been nice if it was more structured with a teacher leading the class as beginners don't usually know what to do.

There was just one girl who was quite young, under 20 I'd say. Otherwise, you could feel the emptiness as the hall was quite big. The girl was not a beginner and knew her moves, so initially I felt out of place. It would have been nice if there were other people at the same level as me (which is no level at all, haha) as then you wouldn't be too conscious of not being able to do things properly.

There'd be other men attending

However slim the chances of this happening, I was hoping I wouldn't be the only man in there. I knew gymnastics is generally more geared towards women but having just one other man in there would have made it less awkward for me (or so I thought). However due to the lack of students in the class, I was the only male there.

How things turned out in the end

As I arrived at DPSA and handed the £5 fee to the receptionist for the class, I was directed to a waiting area where I sat. Teenage girls were coming out of classes which have ended and I started getting a bit nervous realising I was no gymnast and I was going to make a fool out of myself in a short while but then I recomposed my thoughts.

Soon I was told to go downstairs and it was then that I met Lexxi (I actually forgot to ask her name so I'm making this up, just like I will do for the other people I will be mentioning). I thought she was the teacher but she confirmed she was only there as a supervisor and that I had full access to everything in the hall and I could do whatever I wanted. I was gutted and explained I didn't have any clue what to do or where to begin. She kindly offered to show me some moves which I gladly accepted.

Once warmed up, we started with forward rolls. As simple as this sounds, when you're rolling, it feels weird. Maybe because I'm not used to this. Another girl, another staff actually, we'll call her Sam, joined us. Lexxi proceeded to show me handstands and cartwheels. Honestly, I'm not good at these but she was so patient with me and soon the three of us were doing those tricks side by side. Not that I was any good at this, on the contrary, I was very clumsy but the girls were very encouraging that I didn't care how bad my movements were. I must confessed at the beginning I felt really uneasy, especially because they were all girls around me and secondly they were good and I wasn't. 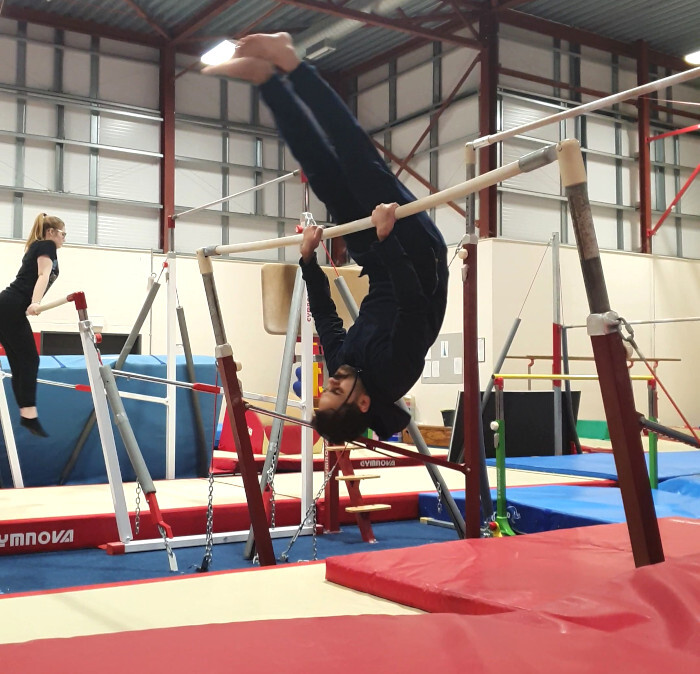 Dani, the other non-staff girl, was doing her own thing and Lexxi tried to show me another trick, the chin-up pullover. She makes it look so easy. I tried and couldn't get my hips and legs to move over the bar. After a few tries, we decided to come back to this one later.

Next was the trampolining. This was Sam's speciality and she taught me how to do a few things. I don't even know what the names are, all I know was that I had to fall on my bum and push up with my hands to jump or do one where I land on both my knees and hands to jump back up. They are very challenging as my body does not work in unity and this stops the flow and brings me to a sudden halt on the trampoline, something which Sam said you get better at eventually.

Lexxi asked me to do a run and forward flip into the sponges but I knew I wasn't ready for this and instead just jumped flat into the sponges. The tricky part is getting out of the sponges afterwards, it takes ages! We then did a squat-on drill which I must say I found easy (yep at least one thing I could do!), then a more challenging one, the dash vault which I kind of got the hang on after a few tries.

With the session coming to an end, I wanted to try the chin-up pullover drill again. I managed to do it just one time though and couldn't repeat the success once more. I asked Lexxi to film me doing it but I couldn't get on the bar for the video as I didn't have much strength left.

What I think about it all

If it wasn't for Lexxi, I don't think I would have enjoyed it that much. She didn't have to teach me anything but still she did and I am thankful for that. Sam as well was very helpful and even though I didn't speak with Dani that much, she didn't laugh at my clumsiness. The girls made me feel comfortable and I would definitely go back again if I have time.

My main reason for going to a gymnastics session was to learn some new drills and test my strength. Now that I know where I stand, I can work on my weaknesses and hopefully get better at the various drills and vaults.

gices Published 30 Nov 2019
I'm a Software Developer and the co-founder of Clever Dodo. Born in Mauritius and now living in the UK, I usually blog about fitness, music, spirituality and driving topics to pass on my knowledge.

Well a friend actually made me register for a gymnastics contest (he wasn't supposed to but well he did and i registed to the club on the last day) and i went to learn all basics on the eve . So they all taught me all these moves at one go. forward roll, backward roll, flips. roundoff. It was so confusing! The next day i won gold medal. I left the sport because they didn't have much equipments and i found the lack of equipments boring

Is there anything that you haven't tried? :P

That's really awesome to have won a gold medal with just one day of learning. Congratulations.

How do you find gymnastics compared to what you practice?

hahah yea I haven't tried snow boarding, kite surf and parasailing. I think gymnastics is awesome but Mauritius lack equipments and their female categories didn't have parallel bars. This was a deal breaker for me because I was stronger than many men but because I was born woman I couldn't compete in other things. I didn't like floor events.

6 replies
571 views
What do you think of the mauritian world chapion Aldo Farla winning his wabba pro card?

4 replies
314 views
Why am I constantly yawning during my exercise routine?